Metastatic melanoma, which arises after initially successful targeted therapy, represents a painful problem for medicine and society due to its high mortality. This project will explore the role of the meiotic component imposed by the melanoma-specific driver mutation of the BRAF kinase onto proliferative cycle in the mechanism of resistance to targeted therapy. The project hypothesis presumes that meiotic and CTA (CTCFL-MAGE A group) proteins ectopically activated by the mutant BRAF modulate the RAS-RAF-MEK-ERK proliferation pathway adapting the BRAF-inhibitor-induced G1/S checkpoint and causing metaphase arrest that enables “mitotic slippage” (also involving down-regulation of the Hippo tumour suppressing pathway) resulting in illicit tetraploidy coupled to reprogramming  and drug escape of a small proportion of resistant and finally de-polyploidised clonogenic cells. This modulated cell cycle, termed the ‘meiomitosis’, is little explored and may open a new avenue in melanoma pathogenesis studies and therapy perspectives. The hypothesis will be tested on melanoma cell cultures and also melanoma patient material. The aim of this project designed as a fundamental research is to address this mechanism as a proof of concept looking for possible new therapeutic targeting, attracting new people to science and increasing the capacity of scientific excellence in the BMC.

During the initial phase of the project, the origin of cancer triploidity was studied using 15 malignant and five benign tumour types from male patients (altogether 2928 karyotypes) available in the Mitelman database. The in silico meta-analysis showed that the heterogeneity of the karyotype with a pronounced triploid fraction was observed in all types of malignancies. In contrast, chromosome X disomy (most commonly seen as XXY karyotype) positively correlated with triploidity, negatively correlated with diploidity and did not correlate with tetraploidity. An additional in silico analysis based on exome sequencing data is underway. In parallel, a collection of primary melanoma tissues and primary melanoma cell lines obtained from these tissues was tested for the presence of the BRAF V600 mutation using conventional Sanger sequencing. The mutation was found in five out of 17 primary melanoma tissues and one primary melanoma cell line, which was also triple positive for specific melanoma markers. This culture will be further used to test the hypothesis in clinical material.

In addition to the meta-analysis of male tumour triploid XXY karyotypes  mentioned above we have published a concept article, which includes own experimental data on the possible mechanism of the origin of triploidy in tumour development (A Digyny Concept for Treatment-Resistant, Near-Triploid Human Cancers, by Salmina et al. , 2019; Genes (Basel). Jul 19, 2019 (10) (7)). Dose studies of the BRAF inhibitor (vemurafenib) and their effect on the development of resistance and morphologically distinct cell subgroups have been initiated in the SK-MEL28 melanoma cell line. In parallel, DNA is extracted from formalin-fixed paraffin-embedded melanoma tissues to detect BRAF and NRAS mutations in patient material. 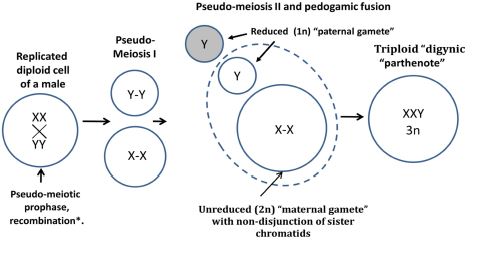 Figure 1. A conceptual schematic of the diginy like formation of XXY triploid karyotypes in somatic male tumours.

The manuscript “Mitotic slippage and extranuclear DNA in cancer chemoresistance: a focus on telomeres” has been prepared and submitted to the International Journal of Molecular Sciences.  In this manuscript, we suggest the conversion of the telomerase-driven telomere repair into alternative lengthening of telomeres coupled by homologous recombination with inverted meiosis occurring at the sub-telomere breakage sites. In parallel, BRAF and NRAS mutational status in formalin-fixed paraffin-embedded melanoma tissues is ongoing.

BRAF inhibitor (vemurafenib) effect on the development of resistance and morphologically distinct cell subgroups have been investigated in the SK-MEL28 melanoma cell line. Rare events of mitotic slippage after vemurafenib treatment were observed in SK-MEL28 cells. Increased number of cells in prophase was found pointing out the possibility of activation of meiotic genes. Scientific article “Mitotic slippage and extranuclear DNA in cancer chemoresistance: a focus on telomeres” published in the International Journal of Molecular Sciences (2020 Apr 16, Volume 21 (8): 2779; doi: 10.3390/ijms21082779).

The manuscript of the chapter “The role of the meiotic component in reproduction of B-RAF mutated melanoma: a review and “brain storming” session” has been prepared and accepted for publication in the book under the working title “Melanoma”. In this chapter, we reviewed the potential mechanisms of meiotic influence on the cell and life cycle of malignant melanoma in the genetic, epigenetic, and evolutionary aspects. We suggest that the involved mutant B-RAF and N-RAS-induced senescence may be reversed by reprogramming, with stemness linked to meiotic landscape. The bioinformatic study of the densely connected protein interaction network of cancer testis (CT) antigen expressed genes revealed the melanomagenesis attractor composed of PRAME and small MAGEA-group in primary tumors as compared with B-RAF-mutant nevi; restructured stemness network; invasive melanoma further displays the leading role of SPANX CT antigen group; meiotic genes are expressed in all three tissue cohorts. In parallel, experiments in SK-MEL 28 melanoma cell line and analyses of B-RAF and N-RAS mutational status in formalin-fixed paraffin-embedded melanoma tissues are ongoing.

The book chapter “The role of the meiotic component in reproduction of B-RAF mutated melanoma: a review and “brain storming” session” prepared in the previous reporting period has been published (“Melanoma” OpenInTech, 2020. doi: 10.5772/intechopen.93641). An article has also been published on the clinical and tumour histopathology features of melanoma patients associated with melanoma progression and metastasis – Pjanova D, Ruklisa D, Kregere E, Azarjana K, Ozola A, Cema I. Features associated with melanoma metastasis in Latvia. Oncol Lett. 2020 Oct;20(4):117. PMID: 32863930. doi: 10.3892/ol.2020.11978. The role of polyploidy and bivalent genes in tumours were analysed using a systems biology approach and results were summarised in the publication – Anatskaya OV, Vinogradov AE, Vainshelbaum NM, Giuliani A, Erenpreisa J. Phylostratic Shift of Whole-Genome Duplications in Normal Mammalian Tissues towards Unicellularity Is Driven by Developmental Bivalent Genes and Reveals a Link to Cancer. Int. J. Mol. Sci. 2020, 21, 8759. https://doi.org/10.3390/ijms21228759.

During the reporting period, the presence of meiotic processes in melanoma cells and the possible correlation with the status of BRAF gene mutations were analyzed. Preliminary experiments have shown an association between the BRAF mutational status and an increase in the number of mitotic cells in the cell cycle prophase, which simultaneously correlated with the presence of DNA breaks and reduced histone H3 expression. This indicates a possible “mitotic slippage” and a possible transition to a meiotic prophase where DNA recombination occurs. This hypothesis is also confirmed by the presence of expression of meiotic genes in the analyzed cells. Work on this hypothesis continues.

Work continued on the analysis of meiotic gene expression in BRAF mutated melanomas in both cell cultures and tissues of patients. The associations of BRAF gene mutations with melanoma histopathology and tumour-infiltrating lymphocytes were also analysed and results were submitted to the International Journal of Oncology.

Work continued on the evaluation of differences in genes expression at the transcriptome level in BRAF mutated and wild-type melanoma cells. The “mitotic slippage” following treatment of cells with the BRAF kinase inhibitor vemurafenib has been extensively studied in parallel with treatment-induced senescence induction and cell differentiation as a result of treatment. Further analysis of BRAF gene mutations in association with melanoma histopathology and tumour lymphocyte infiltration has been performed.

The meiotic/polyploidy pathway induced by mutant B-RAF in melanoma was found to persist after vemurafenib (b-raf kinase inhibitor) treatment. It seems that at the given experimental conditions it was the minor process. The research, however, has highlighted the role of the replicative stress in melanoma resistance to targeted therapy. Simultaneously, the mechanism of cell differentiation e.g. melanogenesis after vemurafenib treatment was observed. This phenomenon lead to the induction of transient normalized non-proliferative melanoma phenotype after cessation of vemurafenib administration presumable because of not deep G1 arrest. This mechanism might offer a new approach for experimental preclinical trial to prevent resistant survival by differentiation and eventual terminal death.