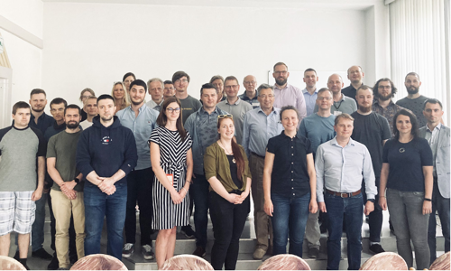 Caption: The Forum brought together researchers from across Latvia, to discuss wide ranging topics around bioinformatics education, infrastructure, and the ambitions of future research Credit: EMBL/Laura Ansone

On 7 July 2022, more than 30 researchers came together at the Latvian Biomedical Research Study Centre (BMC) in Riga, Latvia, to participate in the first meeting of the Latvian Bioinformatics Forum. The gathering was co-organised by several major Latvian life sciences institutions and EMBL, and included scientists from across the bioinformatics community, hailing from institutions including, among others, BMC, the University of Latvia, Riga Technical University, and Riga Stradins University.

Researchers had the chance to discuss their bioinformatics needs and future research directions involving techniques such as whole genome sequencing, transcriptomics, and metagenomics.  They also discussed how to further strengthen the bioinformatics sector in Latvia. The Forum was moderated by Jānis Klovinš, head of BMC’s research council and delegate to the EMBL Council, and included a talk from BMC’s director Nils Rostoks on the bioinformatics Masters study programme. This programme, which is offered at the University of Latvia, produces many of the country’s bioinformatics professionals.

Katrīna Daila Neiburga, a research assistant from the Bioinformatics Research Unit at Riga Stradins University, pointed out the positive impact of the gathering. “This Bioinformatics Forum is a great chance to bring together the Latvian bioinformatics community from different research and industry institutions that previously operated mostly individually. I was excited to attend it to get an objective scope of what is going on in the field of bioinformatics in Latvia, and to meet people of similar interests.”

Speaking about the potential of Latvia’s future full membership of EMBL, Neiburga went on to say, “In a similar way that this local bioinformatics forum helps researchers build connections, full EMBL membership would open doors for easier collaboration, and knowledge and skill exchange on a wider level. It would also allow for the possibility of benefitting from established research infrastructure that would, in turn, facilitate future improvements in our own infrastructure.”

From EMBL’s side, the Forum was co-organised by Alvis Brazma, a senior scientist and team leader from Latvia, who has been working at EMBL-EBI since 1997. Brazma studied mathematics at the University of Latvia, later working in the US before obtaining a visiting position at the University of Helsinki. It was there that he met a team leader from EMBL-EBI, and learned about the vast potential of the resources and databases it hosted. “EMBL-EBI was much smaller back then, and had yet to be transformed into the incredible resource that it is today,” he explained.

During the 2000s, Brazma’s work contributed to gene expression data analysis and to building EMBL-EBI’s approach towards maximising the use of public data by researchers around the globe. It was clear that a huge collaborative effort would be needed if data was to be made as useful as possible, with everybody participating in its creation and respecting common standards.

Later, Brazma became involved in cancer research and the International Cancer Genome Consortium (ICGC), which culminated in another data integration project – the PanCancer Analysis of Whole Genomes, which was published in Nature in 2020.  “It’s only through working together on these vast data challenges that we can best use and develop tools to overcome them. This is true for many scientific fields but it’s especially true for bioinformatics,” said Brazma.

Speaking after the Forum, Brazma said, “It has been fantastic to see so many  interested Latvian life scientists. It really shows how Latvian bioinformatics and the life science community can benefit from EMBL’s pan-European approach.”

The Forum points towards an even brighter future for Latvian science and its place in the wider European research sector. Earlier this year, EMBL signed a memorandum of understanding with Latvia’s Biomedical Research and Study Centre (BMC). The agreement aims to stimulate academic exchange between EMBL and BMC, in order to ensure greater connectivity, availability of scientific data, use of shared key technologies, and circulation of talent.  It will enable BMC to further cement its position as a centre of excellence in the fields of molecular diagnostics, personalised therapeutics, and innovative medicines. The MoU builds on a relationship which has been growing in strength since Latvia joined EMBL as a prospect member  in 2020. The country is expected to join EMBL as a full member next year.

Looking ahead, Brazma sees mutual benefits arising from Latvia’s ongoing cooperation with EMBL and European science. “Life scientists in Latvia are extremely successful, as exemplified by the genome sequencing projects and pharmaceutical research. Recently, the President of Latvia, Egils Levits, named science as one of his priorities, which is very positive. Becoming a part of one of the largest international scientific organisations will accelerate deeper integration of Latvian scientists into the European science community, allowing life scientists to fulfil their ambitions, and will provide an excellent return on investment by training interdisciplinary talent and attracting more international funding through joint projects,” he said.